Erik and Martin Demain are a father son team. Martin comes from a traditional art(s) and glassblowing background. Erik is a trained computer scientist and glass blower as well. Their work was recently featured in the Nova film the Origami Revolution. The shape shifting robot in the preview here was part of their work. The interesting thing about the work that they do is that well they’re both at MIT – which implies a relevance to not just art but also science and/or technology. They use their disciplines to inform their handmade work and to test the possibilities and mathematic realities of origami.

Their work is featured in part of the exhibit Forecasting: Climate Change and Water Impact at the Museum of the White Mountains. Erik and Marin helped explore The Cut and Fold Theorem described on Erik’s site as “The theorem is that every pattern (plane graph) of straight-line cuts can be made by folding and one complete straight cut. Thus it is possible to make single polygons (possibly nonconvex), multiple disjoint polygons, nested polygons, adjoining polygons, and even floating line segments and points. There are two methods for solving this problem, by different sets of people. I call them the straight-skeleton and disk-packing methods.”
Using the Cut and Fold Theorem they developed a cool site where you can learn to fold any message.

Why is this so cool? Well the relevance to someone in a maker role on campus – I was extremely excited to see what may be considered a craft integrated into making, computer science and even robotics. Skill sets and tools they’ve used with their work included: glass blowing, computer science, laser cutting, robotics, mathematics, x-ray, 3D printing, 3D scanning/CAD and more. Not only was that cool, but the ideas around say someone practicing origami and its ties to innovation were very cool. Studying their work is a low barrier entry to understanding making in terms of computer science, math and engineering.

The one issue I had personally though stems from the challenges I’ve always faced with origami – I have trouble understanding the written instructions – that for me has always been a struggle. Since I was a young child my parents’ encouraged my sister and I to do origami and the best I could do was this paper frog. Crane instructions frustrated me to no end, as I could not spatially figure them out.

Origami is one of the first tried and true steps for me discovering learning styles I thrive in i.e. kinesthetic or visual. I’ve thrived with gifs in my world to say the least, and I do wonder if computer generated models displaying steps could also help me better understand the processes around origami, and help people like me succeed further in our understanding of the natural world, computer science and engineering.

With a little hands on instruction from Erik, I thrived. 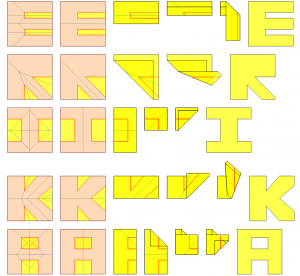 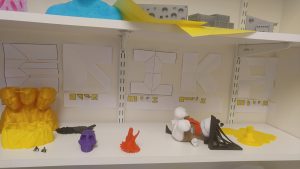